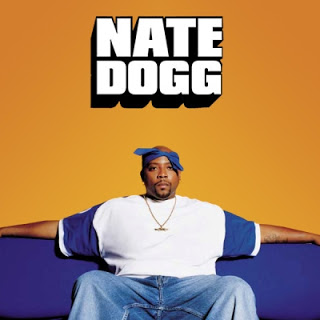 Nate Dogg was a rapper known for his prolific collaborations with numerous other hip-hop artists, whence he can usually be heard singing a catchy hook in between melodic rap verses. Nate Dogg passed away recently, and I thought it would be fun to honor him by creating the Nate Dogg number. Similar to the Erdős number, the Nate Dogg number is the collaborative distance between a person and Nate Dogg as measured by a collaboration on a musical track.

It’s likely quite easy to determine the Nate Dogg number for many hip-hop and R&B artists due to the popularity of collaborative tracks and remixed songs featuring upwards of half a dozen to a dozen different artists. One could imagine that the graph representing the collaborative efforts between contemporary rappers and R&B singers is quite dense and well-connected, with most artists having low Nate Dogg numbers. Theoretically, since Nate Dogg has passed away, the number of artists with a Nate Dogg number of 1 should remain constant perpetually. That is, until Nate Dogg starts releasing tracks posthumously a la 2Pac.

An interesting area to explore would be to determine the Nate Dogg number for artists in genres that are markedly distinct from hip-hop and R&B. For example, what would you guess the Nate Dogg numbers to be for Björk, Barbara Streisand, or Marilyn Manson? These exercises can easily be done by generating the aforementioned collaboration graph and doing unweighted shortest distance calculations from the root node representing Nate Dogg. Sites like MusicBrainz provide free, public-domain data sets that include artist and track data, though parsing and normalizing the data is a small challenge in and of itself.

Calculating Nate Dogg numbers by hand might be more fun than programmatic calculations, and may reveal interesting tidbits of music trivia unbeknownst to the Nate Dogg fan. It might even make for a fun road trip game: given a random artist, find the least number of collaborative links between the artist and Nate Dogg.