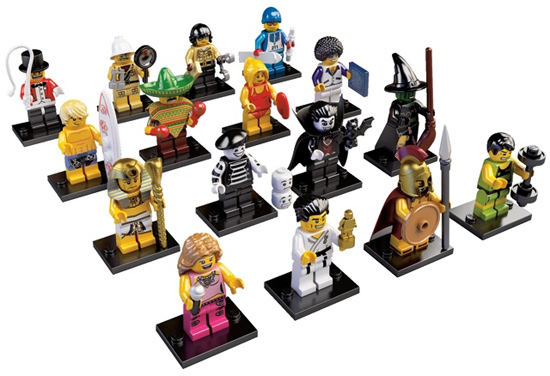 I recently attended BrickCon and had the pleasure of listening to a very entertaining talk about Lego Minifigures. For those not in the know, Lego recently released a set of Lego Collectible Minifigures. Apparently, the collectible minifigures were made available for only a limited time, and come in “mystery” packages that don’t show the minifigures inside, just like a pack of baseball cards.

In the Lego lovers circuit, these things are currently selling like hotcakes. The speaker at BrickCon likened the minifigures hysteria to a virus in that the collectible minifigures are like “small infectious agents.” Lego fans are doing everything they can in order to collect every figure in a series.

At BrickCon, there were sessions specifically for minifigure trading; people have also taken note of the unique barcodes on the back of each package and are bringing in barcode printouts to stores in order to find the minifigures they’re missing; there’s even a Lego barcode scanner for Android phones that that can identify the minifigure packages. However, the clever Lego folks in Denmark are one step ahead: the next series of minifigures will have no bar codes on them.

I was reminded of the Lego minifigures when I came across the coupon collector’s problem while I was flipping through CLRS. Lego minifigure collectors have the same dilemma; they need to know how many minifigures they need to buy before they can expect to have collected every figure in a series. It turns out that the expected number of purchases, given n distinct items, grows on the order of n log n. Since there are 16 figures in each Lego collectible minifigure series, one can expect to purchase around 55 minifigures before collecting every unique one.

The catch is, according to the talk, Lego didn’t manufacture and release the minifigures with uniform distribution. Apparently, certain minifigures like the popular Spartan Warrior are much more rare and in demand than other minifigures, such as the oft-ridiculed Ringmaster. Nevertheless, even if there was an equal probability of getting each minifigure (1/16), the expected number of minifigures one would need to purchase before collecting 300 Spartan Warriors is 4800. Touche, Lego, touche.